Spanish Heath (Erica lusitanica)  is a spreading shrub that is very successful at sneakily spreading along our local roadsides and invading our bushland. It has a number of attributes that make it a very successful weed, it is able to spread by suckers as well as seed. It produces a prolific amount of seed with studies showing that a single plants can produce 9 million small dust like seeds annually (Blood 2001).

Spreading unchecked along a highway roadside.

Large infestation that has spread over an embankment. 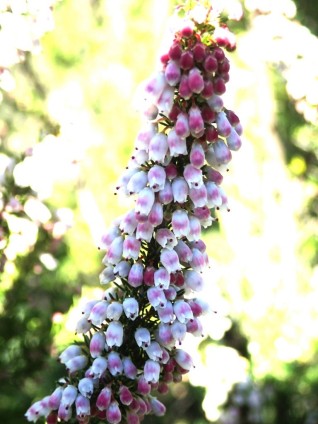 Close up of small pink and white flowers 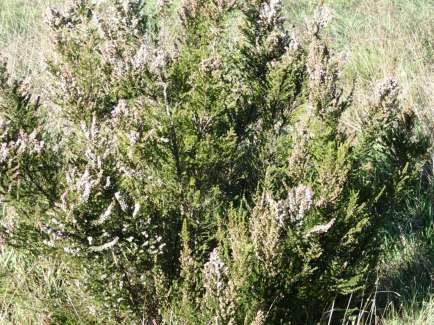 A large plant like this can produced millions of seeds a year.

The main reason it is able to prosper is that it is often mistaken for a native species, its foliage and growth habit have similarities to species such as Common Heath (Epacris impressa) which is Victoria’s floral emblem.  If in doubt about whether or not the plant is Spanish Heath, you can contact the Local Shire or Department of Environment and Primary Industries (DEPI) for assistance. (Or submit a photo to this site).

Spanish Heath can be controlled by hand pulling plants, especially seedlings, although to avoid re-growth by suckering, it is important to remove all of the roots. Alternatively larger plants can be cut off at the base and treated with a herbicide (e.g. Glyphosate) as per the instructions on the label. Although there is no chemical registered in Victoria larger infestations can also be carefully sprayed “off label: using a suitable non-restricted herbicide (see your chemical supplier for recommendations).

Avoid slashing the heath as this will most likely encourage suckering and growth of the plant   and possibly help spread the seeds. Be careful to dispose carefully of any Spanish Heath that has been removed, to avoid it spreading to new sites.

Senecio’s are a group of plants that belong to the Daisy (Asteraceae) family. Locally one member of the family Senecio Jacobaea (Ragwort) is well known as a serious pest to landholders and its impact was one of the contributing reasons that many farms in the Strzelecki Ranges were abandoned. There are however a good number of Senecio’s that are native  plants and are an important part of the local environment, particularly as colonisers of disturbed sites, and thus providing ground cover to reduce erosion and keep out introduced weeds.

Three of the local species Fireweed Groundsel (Senecio linearfolius), Variable Groundsel (Senecio pinnatifolius) and Shrubby Fireweed (Senecio minimus) are most common in the wet and damp forest vegetation classes. There are four other species described below, these species are more likely to be encountered at sites that have less rainfall, such as the lowland forest vegetation in Traralgon South Flora and Fauna Reserve.

Rough Fireweed (Senecio hispidulus) grows up to 1 metre tall and has green shiny leaves that have toothed lobes. They are covered in tiny hairs that make them feel a bit like sandpaper to touch.  At the base of the leaves where they attach to the stem there are a pair of lobes with teeth (auricles). The underside of the leaves are covered in longer white hairs. Like all of the four species described in this post the flower heads are surrounded by green bracts, without any of the yellow ray florets that look like petals.

Hairy underside of a leaf.

Base of the leaves, where they attach to the stem with a toothed lobe (auricle) on either side. 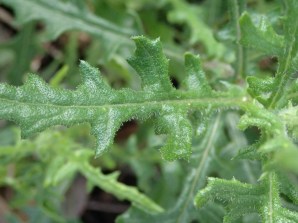 The common name relates to the rough textured lobed leaves.

Fluffy seedheads, ready to disperse in the wind.

Annual Fireweed (Senecio glomeratus) Annual Fireweed has some features in common with Rough Fireweed, it also has toothed lobes at the base of the leaves and the flowerbuds look similar. It is without the roughly textured leaves, it is usually covered in soft cobwebby type hairs. 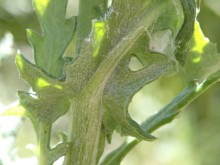 Underside of the leaves have a fine cottony texture. 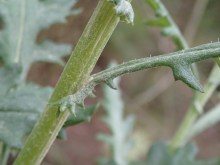 Also has a pair of toothed lobes (auricles) where the leaves attach to the stem. 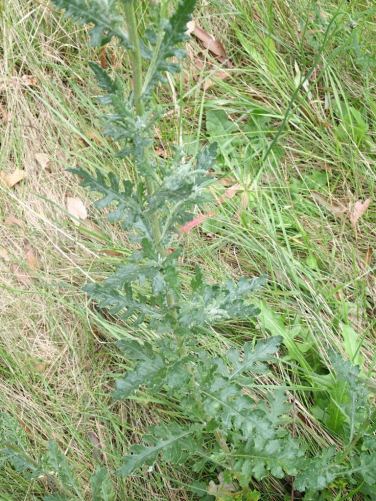 Where the leave connects to the stem, does not have the toothed lobes like the previous 2 species.

Flower heads are narrow and usually wider at the base.

Leaves towards the base of the plant.

Underside of the basal leaves, hairy and purple.

Cotton Fireweed (Senecio quadridentatus) – Cotton Fireweed often grows in the same locations as Slender Fireweed and is also quite slender. It is a widespread species and will come up in disturbed areas where little other native vegetation exists, it can withstand dry conditions. It is covered with dense cottony hairs, which can help with its identification, they give the plant its somewhat grey appearance. 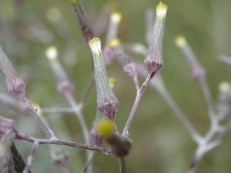 Planning to get the most efficient use of your weed control resources following a busfire is vital. Here are some tips.

A common weed that has emerged and become conspicuous since the 2009 fires are Ink-weed Phytolacca octandra. This erect, herbaceous perennial from tropical America used to be a noxious weed in Victoria. It is still considered to be a troublesome weed. It infests bare soil areas and is spread by birds colonising large areas Ink-weed can grow up to 2 metres high and has brittle spreading branches. Red coloured stems which grow from a well-developed tap-root. It has smooth bright green leaves. Greenish white flowers occur close together on upright tapered spikes between August and November. The fruits are dark purple to black berries which exude a red-purple juice. This plant can turn up in gardens and bushland unnoticed and can dominate large areas inhibiting the growth of more desirable species. Ink-weed can be grubbed out being careful to get as much of the tap-root as possible. It will also respond well to being sprayed with an appropriate herbicide. Brush Off (Metsulfron Methyl) can be effective. (Text Source from SGLN weeds website)

This site on a steep slope was severely affected by fire. The Wattle trees on it were sensitive to fire and were all killed. For some reason there has been little regeneration of native species and the main thing that grew after the fire was blackberries. The Blackberries were successfully sprayed and their cover was dramatically introduced. However the bare soil provided an ideal opportunity for this Variegated Thistle to take over and spread. Rehabilitation of this site will be a slow process. The thistles have now been sprayed and native tubestock have been planted, but a long-term follow-up weeding program will have to occur to control the thistles and blackberry and allow the native vegetation to eventually again dominate the site.